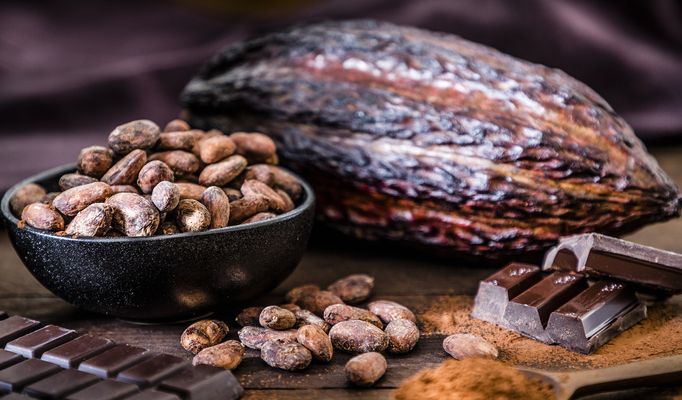 Dark chocolate has gained a reputation for being a healthy option because cocoa beans, which chocolate is made from, contain plant chemicals called flavanols which are being investigated for their heart health benefits.

In reality, many of these flavanols are removed during the manufacturing process. This means chocolate does not contain enough of these plant chemicals to be considered a health food. Chocolate also contains fat and sugar, so portions need to be kept small. But that doesn’t mean you can’t enjoy some as part of a healthy diet.

The antioxidants in cocoa beans

Like all antioxidants, flavanols stop unstable molecules known as free radicals from damaging our cells. A lack of antioxidants in the diet can put you at a higher risk of heart disease, cancers, Type 2 diabetes and other long-term diseases, so it’s important to eat foods which contain antioxidants.

Studies looking into the flavanols in cocoa beans, particularly the flavanol epicatechin, have linked them to benefits for heart health such as making your blood vessels more elastic and lowering blood pressure.

Chocolate is high in calories because of its sugar and fat content, so if you eat too much of it you could put on weight.

Studies have been carried out to find out whether small amounts of chocolate, eaten often, contain enough flavanols (specifically epicatechin) to have similar health benefits to cocoa.

A review of the evidence in 2016 suggested that a daily 20g portion of chocolate would need to contain at least 200mg of flavanols and 100mg of epicatechin to have a similar effect to cocoa. The processing methods used in the confectionary industry mean that 20g of chocolate does not contain this amount of flavanols so can’t be considered to have the same benefits as cocoa.

Although it contains less than cocoa, dark chocolate does contain more flavanols than milk chocolate, while white chocolate contains no cocoa and no flavanols at all.

How to eat enough flavanols

The best way to get the heart healthy benefits of flavanols, specifically epicatechin, is to eat plenty of plant foods which are high in these, including:

Better still, include the whole range of polyphenols in your diet by eating a variety of plant foods every day, including fruit and vegetables, pulses, wholegrains, herbs and spices.

Are there other nutritional benefits of dark chocolate?

Theobromine is a plant chemical found in cocoa and tea. It’s currently being researched for potential health benefits such as lowering blood pressure. However, as with flavanols, it appears that small portions of chocolate would not contain enough theobromine to get the benefits of cocoa.

The type of fat present in dark chocolate has also been highlighted as healthy in the media.

How to enjoy chocolate as part of a healthy diet

Although it’s not a health food, you can still enjoy dark chocolate and other types of chocolate as part of a healthy diet. The trick is to eat chocolate in moderation, perhaps a couple of squares, rather than a whole bar.

This might not sound enough, but a recent study has found that if you eat mindfully and really concentrate on enjoying the taste and feel, you get more satisfaction from smaller portions.

If you struggle to stop at two squares, dark chocolate might be a good option – it has a richer flavour and does seem to leave you feeling more satisfied by smaller portions compared to milk and white chocolate which are sweeter.

Although there is a lot of press about dark chocolate being healthier than other types of chocolate, our advice is to choose small amounts of the chocolate you prefer as part of a healthy balanced diet.