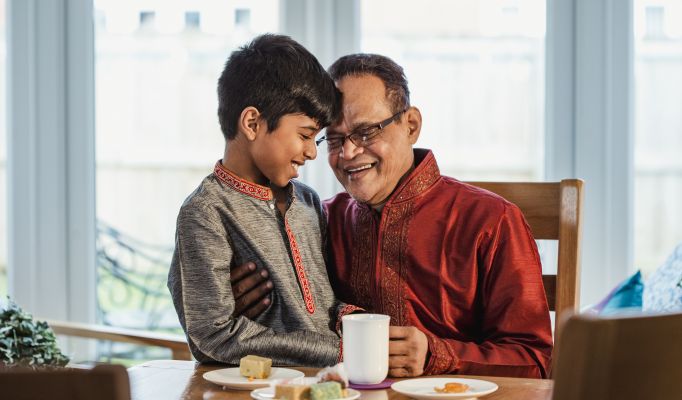 FH is passed down through families, from one generation to another. Most people with FH have inherited just one altered gene, which they inherit from one of their two parents. They will also have inherited one healthy gene from the other parent.

In rare cases it is possible to inherit two altered genes, one from each of your parents. This happens only when two people who have FH meet and have a baby together.

Having two altered genes for FH results in a much more severe form of FH.

People with HoFH have blood cholesterol levels that are exceptionally high, usually between 10 and 20 mmol/L and possibly even higher.

What are chances of inheriting HoFH?

Because both parents have FH, their chances of passing an altered FH gene onto their child is high.

So for example if two people with FH have a family of 4 children, on average:

But this is an average situation. It is possible that all the children in the family could have FH or none of the children will have it.

Because HoFH is a more severe and aggressive form of FH, it is very important that children are diagnosed and treated as early as possible. Without early treatment, children and young adults are likely to develop very early heart disease.

When treating HoFH doctors aim to reduce blood cholesterol to a level where the build-up of cholesterol in their blood vessels is slowed down, stopped and hopefully reversed.

Although most people who have FH are treated with a statin, those with this more severe form of FH (HoFH) don’t always benefit from a statin and so will need other treatments. Those that do respond to statins usually still need some additional therapy in order to bring their cholesterol level down sufficiently.

Resins, fibrates and ezetimibe may be used and can offer some cholesterol reduction for people with HoFH, usually in combination with other treatments.

This is a treatment where the blood is “cleaned” to remove cholesterol. It is similar to having dialysis, a treatment for kidney disease. Your blood is passed through a special machine that filters the cholesterol out. The treatment has to be done regularly; usually as a day patient, in one of the specialist treatment centres. Most people have the treatment twice a month.

Almost everyone who has HoFH will require LDL apheresis. Although it is very effective, you may have to travel a long way to receive treatment because there are only a few specialist centres in England, one in Wales and none in Scotland or Northern Ireland.

Lomitapide is made in capsule form to be taken by mouth and is licensed for use in adults with HoFH.

Provided the treatment plan is followed carefully and the patient follows a strict diet, it has been shown to significantly lower cholesterol and can help people with HoFH achieve their cholesterol targets. It is sold under the brand name Lojuxta® and it is licensed for use in the UK.  NHS England has commissioned the use of Lopitamide for patients living in England with HoFH.

Because of the mode of action of Lojuxta®, people taking Lojuxta® need to follow a very low fat diet, usually less 20% of energy source can come from fat. The manufacturers of Lojuxta® provide dietary support to help achieve this.  Those prescribed the treatment will be given a Patient Care Guide and, a  Very Low-Fat Dietary Plan and a ‘Fat Tracker’. These resources enable patients to look after themselves independently.  Dietetic support is also available to help patients and families to learn how to create a varied diet which can be complied with.

Those taking Lojuxta also need to have their liver function checked regularly and avoid certain drugs that may interact with it.

Take a look at our very low-fat eating plan.